The Fast & Furious brand releases its latest action film of the blockbuster series this weekend. If you’re like us and walk out of the theater asking ‘how did they do that?’, here’s a peak behind the scenes to satisfy your curiosity. It all starts with a storyboard artist meticulously drawing each scene frame by frame. Every action-packed blockbuster relies on a skilled storyboard artist to accomplish the most technical and complex of shots, which is why the Fast & Furious franchise brought in the big guns. No, we’re not talking about Dwayne “The Rock” Johnson, but our artist Anthony Liberatore, who drew storyboards for both Fast Five and Fast & Furious 6 for Director Justin Lin. He shared insight into his process and some of his incredible work with us. 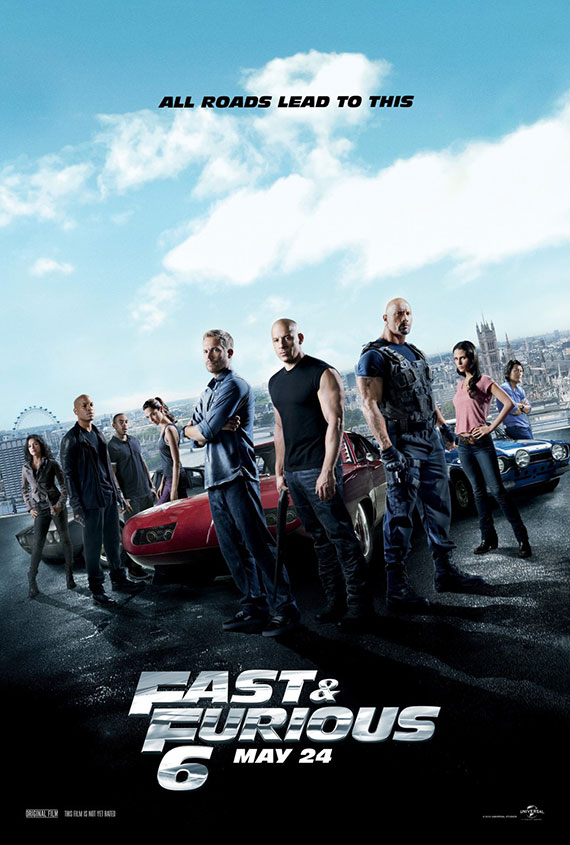 An Interview with Anthony Liberatore

How long have you been working in the business as a storyboard artist?

I’ve been working professionally as a storyboard artist since 2000. I was signed with Motion Artists until 2004. Then I was lucky enough to be represented by Storyboards Inc. and have been there ever since.

How much time did you spend working on Fast & Furious 6?

I worked on Fast 6 for 5 months. We started doing conceptual boards in Los Angeles at the end of February 2012 and by April we relocated to London’s Shepperton Studios where shooting boards were the primary focus. I didn’t return to LA until August. 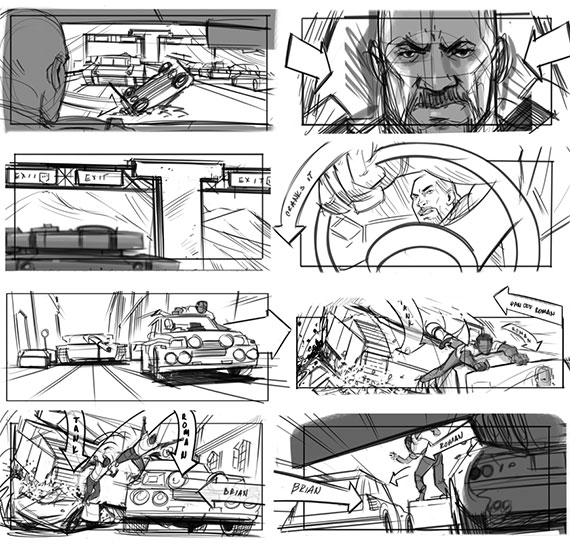 Give us an idea of what your process was like and working with Director Justin Lin?

Justin would give us the broad strokes by describing the overview of a particular scene. As important as the action was, Justin was also very adamant in telling the story of the environment in which these characters populated. He would, at times, call out specific shots he wanted to see. I had the opportunity to fill in the blanks, story-wise, and come up with dynamic angles.

The boards then would go to Justin for final approval. I can say that there were many revisions as locations were constantly changing.

How does working on F&F 6 compare with Fast 5?

Fast 6 was a much more ambitious undertaking than Fast 5. With 5 I was brought on in the middle of the pre-production and was just getting to learn the ropes with Justin. For Fast 6 I was involved very early on, so I had the opportunity to help actually conceptualize some of the gags with Justin.

What is it like to work with a director you’ve worked with before? Is it easier…do you have a shorthand…or more difficult?

For me, I found it a lot easier. We definitely had developed a shorthand by our 2nd go-around. I was also more familiar with the previous crew, so it felt more like a family reunion when we got back together again. 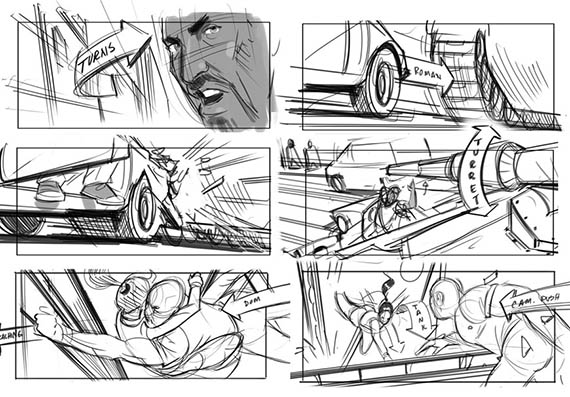 Tell us about working on location in London:

I can say I LOVE London and can’t wait to go back. What an amazing opportunity to get to live in that city for four months. I also had the opportunity to travel through Europe during the many bank holidays and Queen’s Jubiliee. Everyone there was very cool.

Who did you collaborate with most besides the director – production designers, set designers or visual effects artists? What was the process like?

I was sort of serving two masters during this production. Director Justin Lin for the Main Unit and 2nd Unit Director Spiro Razatos for the complicated action sequences. Working with Spiro was an altogether different process than working with Justin. Spiro was very specific about how he wanted the gags boarded. He was very precise and wanted to see a lot of coverage. Once that was accomplished I was free to fill in the story points around the gags as I saw fit. 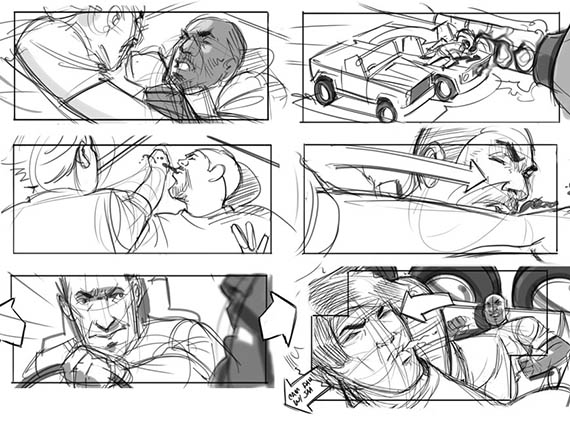 Are you given a full scene to draw at once, or just different sequences? Is the entire film boarded out or just certain parts of the film?

I was given pretty large scenes to flesh out that consisted upwards to a thousand frames such as the Tank and Plane Scene in Fast 6 or the Vault Heist Scene in Fast 5. I also boarded sequences containing no more than maybe four to five frames. Mostly only complicated action scenes were boarded which is good portion of these movies.

There is so much action in this film…how do you go about getting it right? What techniques do you use?

Remember that shorthand we discussed earlier? This is where it was invaluable. I knew from the previous films what Justin liked in terms of angles, camera mounts and composition. I just tried to push the boundaries on what we had already explored. 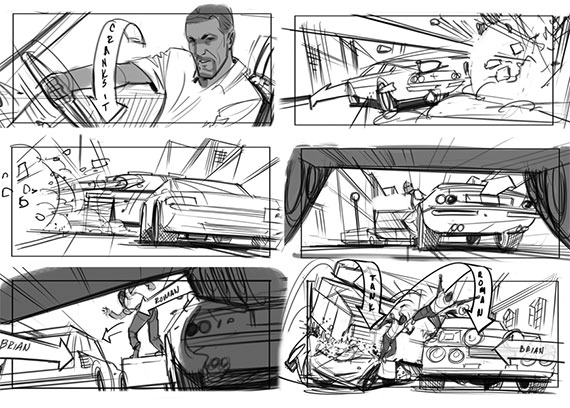 There are so many well known actors in this film…do you have to draw likeness and if so…how do these frames differ from the others?

The primary concern with film boards is to fulfill the story points and bringing the scene to life. First unit frames, frames depicting the main actors, are critical to accomplishing that. But, unless they’re specifically asked for, exact likenesses are not a priority.

How is your process, do you start on paper then work digitally after, is it fully digital, or fully traditional?

Hmmm, depends on how I feel that day. Sometimes I’ll thumbnail with pencil and paper and sometimes digital. The final boards are always 100% digital. Although, there were three crazy English blokes – David Allcock, Doug Ingram & Nick Pelham – that I worked with on this and they were strictly pencil and paper. I tried to convert them, but they were too scared. 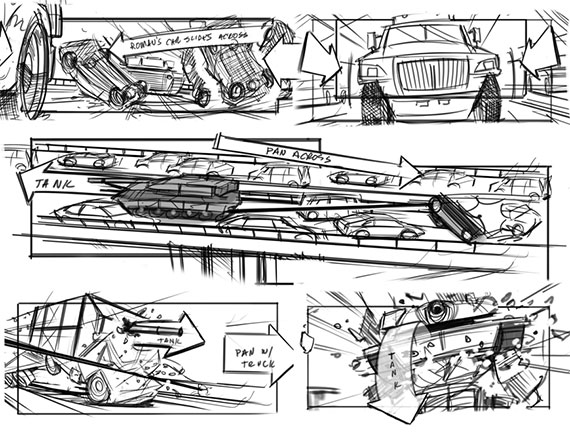 Are high visual effects films more difficult than a standard live action film? What are the challenges?

Not necessarily. I don’t think it matters if they’re practical action shots of expensive VFX shots. They both rely on a great deal of boarding in order to save time and money.

What kind of preparation is needed to board a film like this?

Other than bringing on your “A” game, you have to really be in the mindset of what that story is trying to accomplish. I’ll watch a lot of action films with great car sequences to get me there mentally. You can never watch enough Mad Max to get you into the mindset! 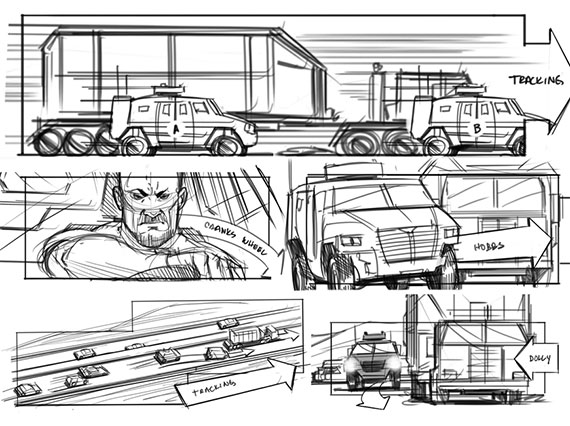 What advice would you give a young storyboard artist who would like to have a career in film like you have?

Draw. Always. Everything else is second.

Oh, and don’t ever let anyone tell you that you can’t make it in this business. 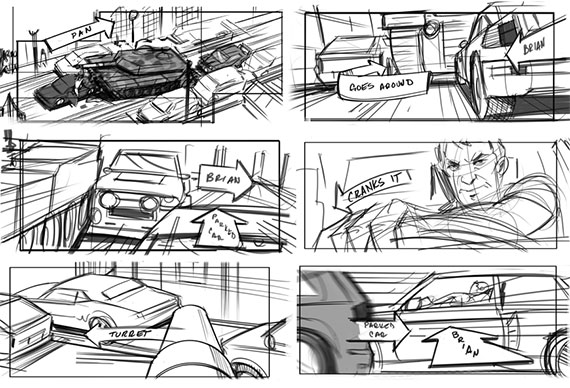