Twenty-two years after the events of Jurassic Park, we visit a fully functioning dinosaur theme park, Jurassic World, on an island off the coast of Costa Rica. The luxury resort provides a variety of habitats for the genetically engineered extinct creatures. The food chain is inevitably disturbed when one of the dinos escapes. Jurassic World, directed by Colin Trevorrow and originally imagined by Steven Spielberg, had the biggest opening weekend in box office sales in movie history! We take a peek into the creative process with artist storyboard artist Tim Burgard.

Q: How long have you been working in the business as a storyboard artist?

The early ‘90’s if you count my years working in animation.

Q: In general, describe your experience working on a big “Blockbuster” film sequel.

I’ve worked on big Blockbusters as well as sequels but rarely in the same series. This is my first Jurassic movie and for years I thought I missed my chance. I find that sequels have the advantage of established designs and the drawback of trying to achieve some originality as well as match expectations. Otherwise the experience of working on originals and sequels is the same.

Q: What are your first thoughts about seeing your work appear on the big screen?

As a board artist, it is sometimes difficult to recognize a sequence because there are always changes and weeks of work can go by in seconds. When I see one of my ideas on the screen I do feel pride.

Q: How did you prepare for boarding these films? What did you want to keep in mind about jumping on the sequel?

“Oh boy! I get to draw dinosaurs!” 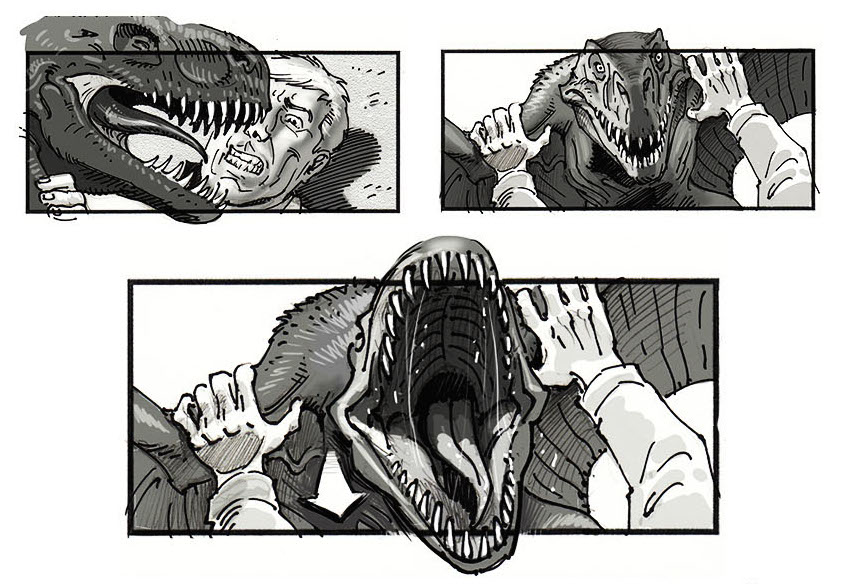 Dave Lowery, a board artist on the first one, took an earlier pass at some of the sequences I worked on. Steven Spielberg approved my version of the boards, but I actually never worked in person with any of the original creatives on this show. Other shows I have had the privilege, though!

Q: Did you have a favorite scene?

When a Pteranodon goes from predator to prey in the lagoon is my favorite. (Frames shown below!) 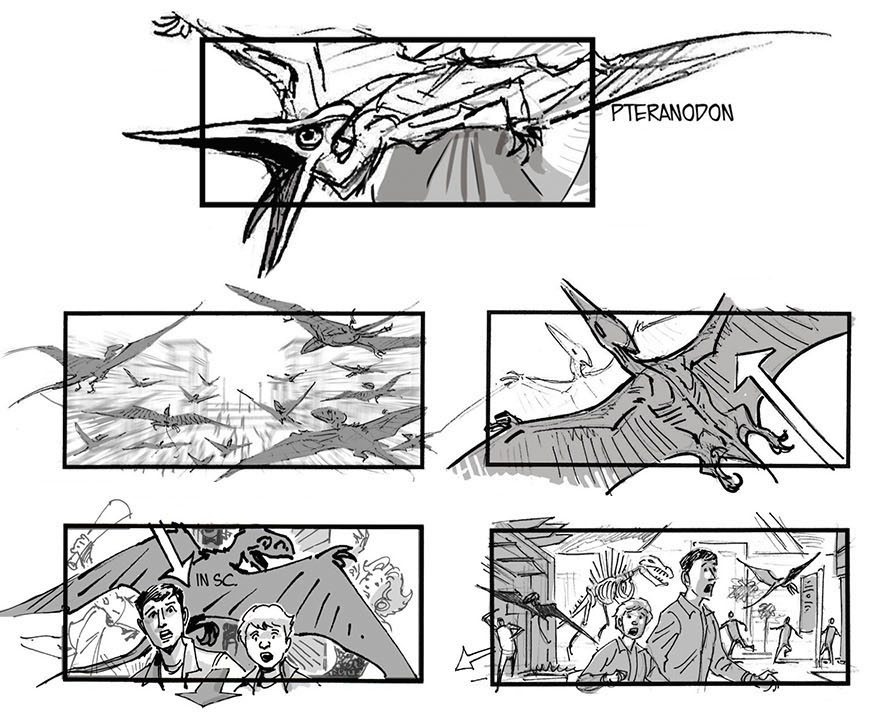 Q: Were you given full scenes to draw at once or were they separated into sequences?

I came on late after certain scenes were rewritten and were still in flux. A helicopter scene I boarded was cut because an earlier scene was similar. Otherwise I handled my chunk of the film in sequential order. 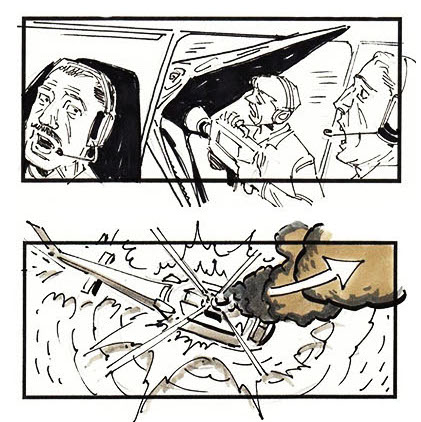 Q: What kinds of references were you working with in order to draw extinct creatures? How did you come to understand their movements?

I’ve been a dinosaur lover all my life, and I have tried to keep current on all the theories and discoveries. As a board artist I am limited to the approved creature designs but I take that first crack at posing them in a realistic and dynamic way. 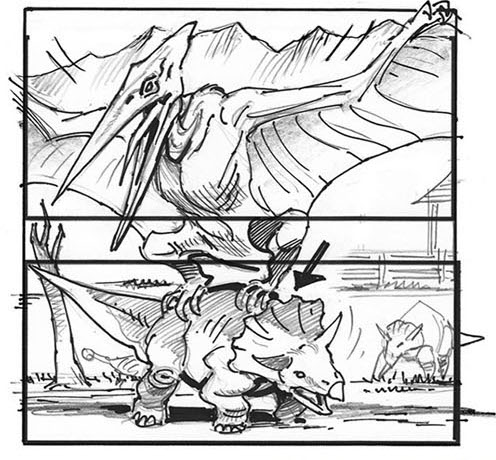 Live action only boarding has to make the best of whatever resources are available. Adding digital VFX expands the possibilities, but I still need to know what the film’s limitations are going to be before I draw a shot.

Q: Did you start on paper then work digitally or begin working digitally from the get-go?

I work best starting with a pencil, but eventually I finish using Photoshop.

Q: How much time did you spend working on Jurassic World?

Just a couple of months, which is becoming more typical in the storyboarding business.

Q: Do you have any advice for young artists who would like to break into a film storyboarding career?

Good luck. Be ready when your chance comes.