The final episode of season six of True Blood finally hit the air. We’ve been sitting on the edge of our seat waiting to share the incredible work and behind the scenes commentary by our very talented artist, Dan Caplan. We asked Dan about his experience working for True Blood over the years. We hope you enjoy!

“I’ve worked on True Blood since the pilot episode, directed by Alan Ball. Before that, I worked with him for the whole run of Six Feet Under, going back to the pilot of that show, which was his directing debut. In addition to being very clever, he’s got to be one of the nicest, most down-to-earth people in Hollywood.

Both he and the other executive producers have cultivated a creative environment that is aware that production is serious business, but it’s also a fun business.

We have a core group of directors who work with us each season (often doing 2 each per season), a few that drop in less often, and occasionally someone who is new to the show. They all relish the chance to dig into the wild stuff that goes on in Bon Temps–as do I.” 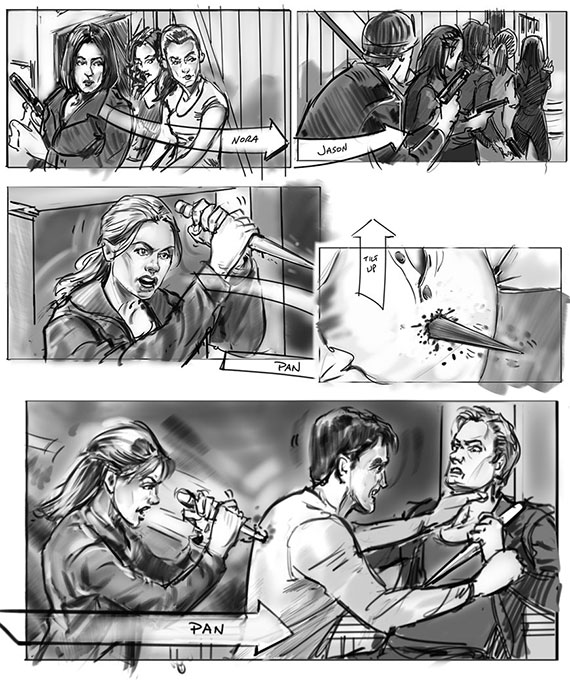 “Among our core directors are other important people on the show. One is a Director of Photography, another is an Editor, and as of the 5th season, even one of the cast joined the ranks–Stephen Moyer, better known as Vampire Bill.

Stephen brings a lot of enthusiasm to the process, with a keen eye on the story, and how to use the camera to underscore the acting. It’s great to work on a scene that he’s in, ’cause who’s better to act out the scene than the guy will be doing it on camera?! There were times that we’d be discussing the action and camera work when he’d look at me intensely, and I thought I’d be glamoured any second!” 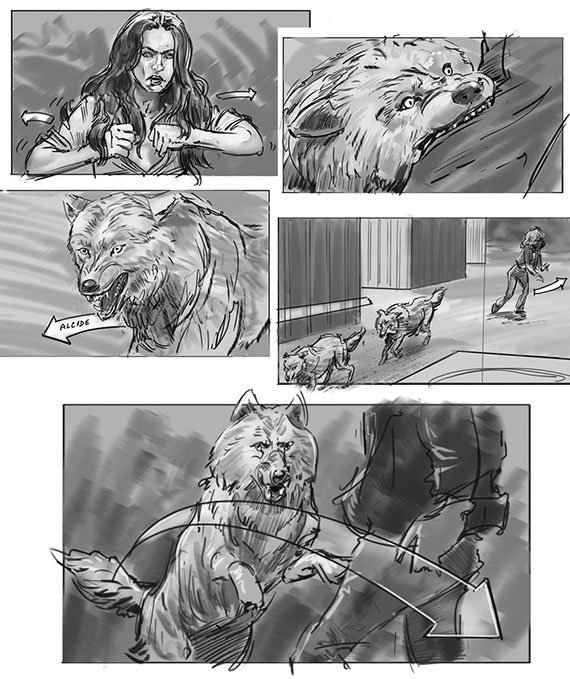 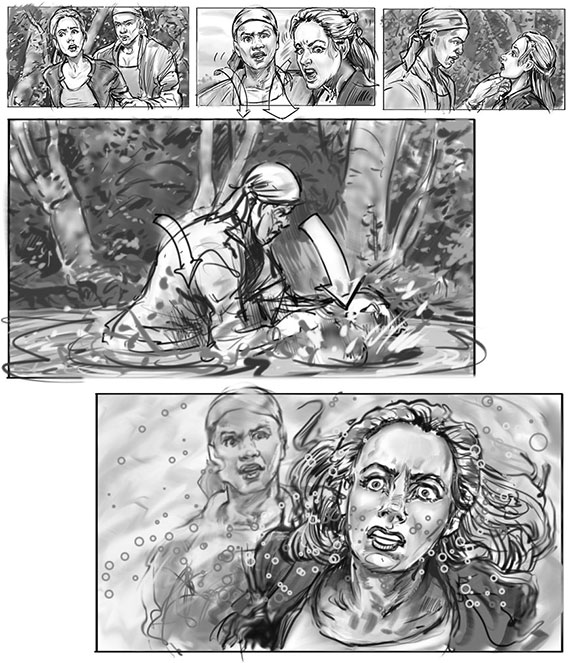 “I generally do a few sequences per episode, depending on what the writing dictates, and what the director has in mind. Much of it involves stunts or VFX, frequently both, and may include Make-Up FX/prostheses as well.

Television production has a pretty tight schedule, and the past couple of seasons have overlapped production of multiple episodes to make the most of time and money spent on sets and crew. I’ve worked closely with the Assistant Directors to try to set my meetings with directors as soon as they start prepping for their episode, in hopes of getting at least a set of rough storyboards that they can use in their production meetings to be sure that all departments–Camera, Art Direction, Props, Make-up, VFX, Stunts–understand what role they play in these unusual sequences.

In the hallway of the production office is a wall collage–I think it’s called “the Wall of True Death”–with still shots of all the bizarre and bloody ways characters have met their demise. And I’ve drawn most of them. When I read a death scene in the script, I know there’s a good chance I’ll be drawing it, since there’s usually a stunt and/or special/visual effects involved.” 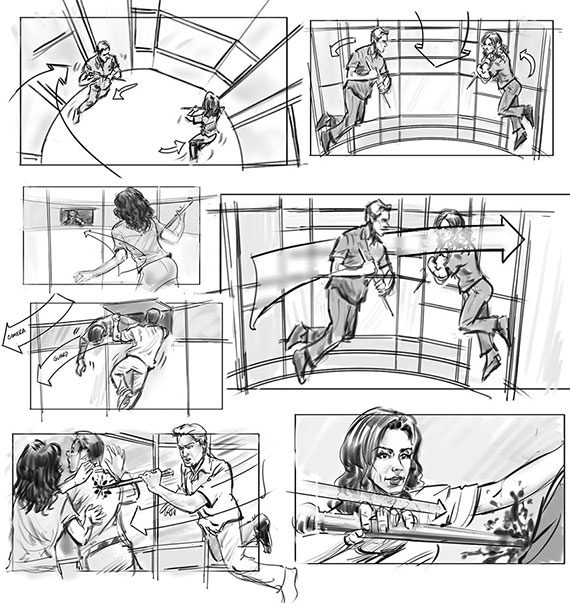 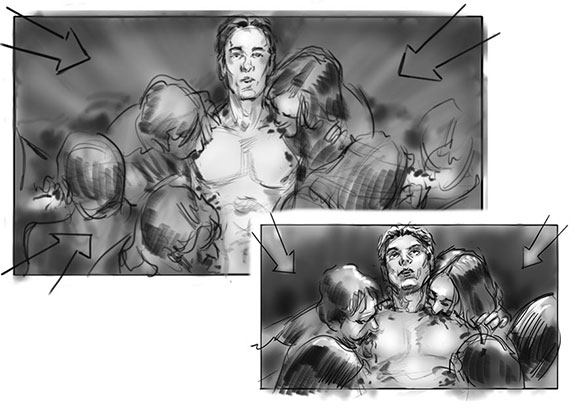 “With Nora’s death this season, I was invited to a rehearsal, which was scheduled early because the effect involved coordination of the physical blood effects and the digital visual effects. Since my work is usually done well before the actors get involved, it was great to see that end of the creative process, and how the actors’ choices and concerns can affect how the action and effects play out. Once Alexander Skarsgard (Eric) and Lucy Griffiths (Nora) worked out how they would interact, we could figure out what kind of effect was needed, and where.

Though for the past few seasons I’ve gotten a script ahead of my meetings, I never know exactly what kind of crazy thing I might be asked to draw each episode. It could be a bull-headed maenad chasing a waitress, violent vampire love-making, or faeries throwing fireballs. Can’t wait to see what next season will bring!” 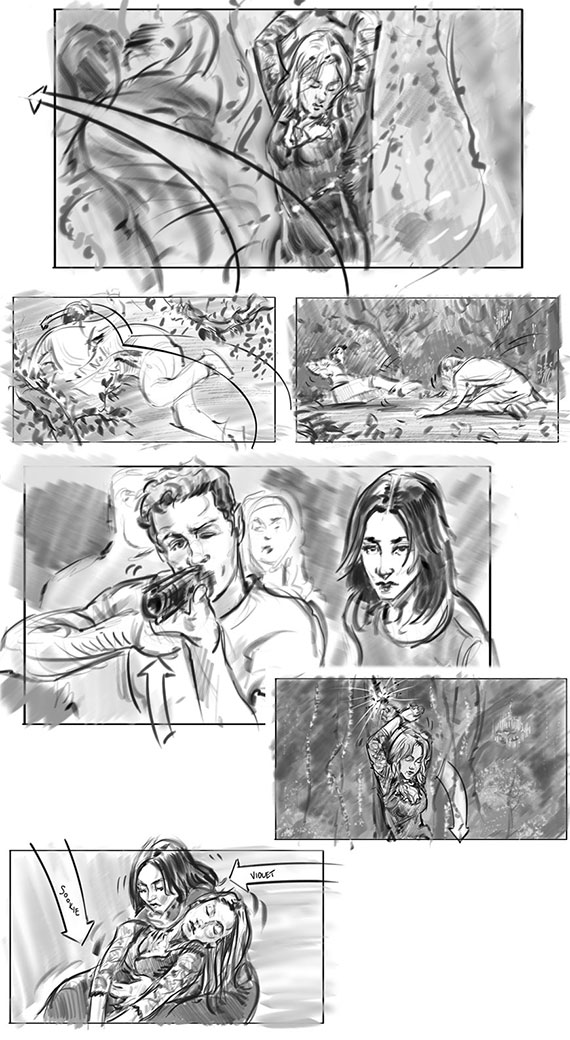